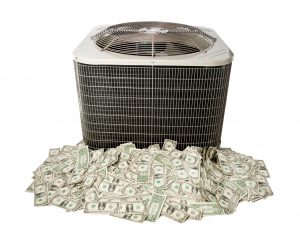 Refrigerant is not actually a name for a specific fluid, though. Instead, it’s a blanket term for a number of different materials that are used for the same general purpose. For many decades, the most common type of refrigerant in use was Freon. In fact, this is still the name most people come up with when you ask them what refrigerant is. However, Freon has a number of problems associated with it that have led to it being phased out of use in air conditioners over the years. Now, Freon is all-but-gone from the field, which is part of the reason that you should replace your air conditioner if it uses the fluid. Learn more about why you should install a new system if your old one uses Freon, by reading below.

The first types of refrigerant were actually conceived in the 1890’s, and were used for a number of different applications up until the 1920’s. However, they were extremely toxic and caused a number of environmental problems. Freon was one of the new types of refrigerant designed to replace those original fluids and gases in the mid-20th century. However, even these new alternatives were found to be problematic for those exposed to them. The negative health effects associated with Freon exposure were a big part of the reason that the refrigerant was so heavily restricted by the Kyoto Protocol of 1997.

So, by now you’re probably thinking “so what if it’s toxic? I’m never exposed to it anyway, right?” While it may be true that you aren’t actively huffing Freon out of your air conditioner’s refrigerant line, this slow phase out still has a negative effect on you. Because manufacturers have been gradually dropping the use of Freon in their air conditioners, finding replacement Freon when an old system develops a leak has become increasingly difficult. Refrigerant leaks aren’t exactly uncommon, which means that if and when your air conditioner develops that issue you may not be able to get it repaired.

If your air conditioner relies on Freon to function, it’s likely much more cost-effective to replace the entire system now. Chances are, repairing it will be much more expensive than installing an entirely new system. Besides, any air conditioner that is using Freon at this point is likely reaching the end of its natural lifespan anyway. Consult with a professional about whether or not installing a new system would benefit you.

Touchstone Heating & Air Inc. offers a full range of air conditioning replacement services throughout Starke, FL. If your air conditioner uses Freon, and you want to replace it, contact us today for an appointment. Ask about our promo offers on payment plans, as well as our 10 year guarantee on parts and labor.